Ladies and Gents, Boys and Girls, People, Players and Peasants alike, we present: 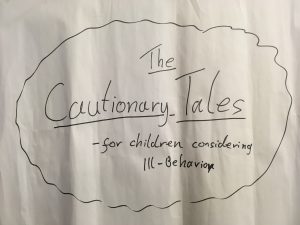 So we’ve just had week 3 and everyone has spent the past week researching into circus acts and specialities that you would’ve found at the stereotypical circus/carnival scene, such as stilt-walkers, jugglers, contortionists, escapologists, etc (this list goes on and on!). This is what our wall for ideas looks like so far: 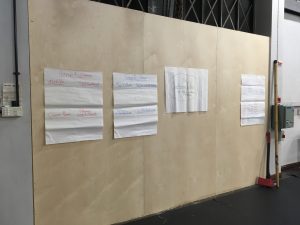 In my next post I shall pop up a picture of how it looks when the students have started pasting their ideas and research all over it! And so far some great ideas have already come to light, such as Chloe’s Barberibbit, a circus Barber that also happens to be a human sized frog (this had me laugh out loud in the rehearsal space, brilliant thinking!)

So, to back up a little bit, this week began with discussing the characters you would find at a circus/carnival setting, and then everyone researching the characters they would like to embody for the entirety of the performance. This means performing walkabout in their character and then remaining as that character throughout the whole of the performance, and then in the show performing as that character playing another character…do you follow? This comes from the idea of the old medieval touring theatre troupe, who will go from place to place performing, but when not performing they may entertaining in taverns as musicians, or fixing shoes as a cobbler, or selling clothing they make on the road. This gives layers and a story for the travelling circus troupe who perform these crazy Cautionary Tales, allowing the characters to quite literally burst out of the story and interact with the audience when not performing their show.

Following this, we visited audience clocking techniques to start thinking about how we directly connect with an audience outside, away from the blinding lights and silence separating us from indoor theatre audiences. This is important in outdoor theatre because there are constantly distractions throughout an outdoor performance and the audience must be included to keep them invested and interested, so we find ourselves walking and breaking that boundary that lies between the audience and the performer. And why do play with this boundary? Because outdoor theatre presents a landscape for fun, silly and innovative theatre making that can entertain, captivate and move an audience in a non-traditional theatre setting. That and because it’s ruddy good fun!

Next week, we continue with audience interaction and hopefully we can get the stilts out!