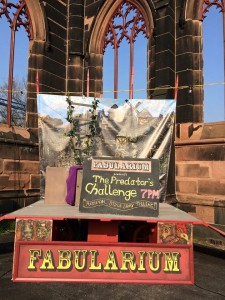 The Predator’s Challenge – Now in the winter of his life, King Noble Lion is too old to hunt his food. The time has come to appoint a chief huntsman to capture his dinner for him, but who deserves such an honourable position? The best way will be to hold a competition amongst his closest allies. Three of the Kings advisers are given the chance to prove their talents to the King, and be paid handsomely in doing so. Who will triumph: the ferocious Wolf, the sly Fox, or can Bruin the Bear prove that wit and speed are not everything a predator needs?
This show can be performed with or without our bespoke wooden cart and can be part of a series of vignettes or as a short stand alone show lasting 15 minutes.

To book ‘The Predator’s Challenge’ vignette or for more information and tour requirements, please contact us or our producer, Lou Lomas at louise.lomas@gmail.com