The Town Band of Bremen 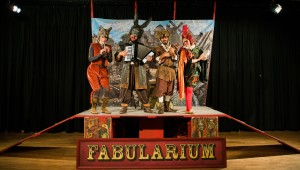 The Town Band of Bremen is an outdoor family show from The Fabularium about four fellow animals who all share a passion for music; featuring storytelling, live music, mask work, puppetry and a medieval cart that can be processed through town centres, community parks, and festivals.

Meet the amazing-yet-mismatched musical family who are journeying to play the gig of a lifetime in the land of the free, to become The Town Band of Bremen. After a dreadful robbery that left their Master penniless and without the means to tend to his animals, the band are now travelling from place to place upon their old trusty cart, sharing stories and singing songs, with many a mishap along the way!

The RSC PILOT Sites in June,

To book ‘The Town Band of Bremen’ or more information and tour requirements please contact us or our producer Lou Lomas at louise.lomas@gmail.com or download our promo pack here. Fabularium Tourpack 2015 (Low Resolution Web Quality)