The Lion and The Fox 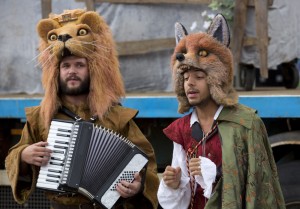 The Lion and the Fox – Crippled by age, King Noble Lion sets a trap to catch his dinner by inviting animals into his Kingdom, proclaiming he is looking for an heir to the throne. One by one the animals are lured into the trap, all too excited at the prospect of becoming the King’s heir, they take no notice that no one returns after dinner with the King! But not all animals easily fall for such a trick, especially a trickster like Reynard the Fox.

Elmfield Erupts, Stourbridge in May

To book ‘The Lion & The Fox’ or for more information and tour requirements, please contact us or our producer, Lou Lomas at louise.lomas@gmail.com

The Lion and The Fox vignette is an adaptation of an Aesop Fable that was created in 2014 for Transported, a Creative People and Places initiative in Lincolnshire. The show was performed as a way to entice an audience and as a warm up act for Strangeface Theatre’s production of ‘Fen Boy’ performed in various locations across Lincolnshire. Directors & Devisers – Gareth Price-Baghurst & Joshua PatelComposer – Glenn NobleAnimal Headpiece Maker – Richard JohnsonTransported Producer – Rosie LesurfProducer for Current Tour – Lou LomasCostume – Kieran StewardSupported in-kind by Coventry University