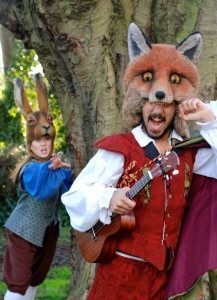 The tale of Reynard the Fox follows the woodlands most infamous scoundrel who prides himself on being the trickster of the forest. But when the Woodland Court announces the theft of the King’s Crown Jewels the animal kingdom immediately blame the fox. Reynard must do everything he can to prove his innocence and avoid certain death, as well as maintaining his devious persona. Will the gift of his silver tongue be a shade too bright against his roguish red fur to save his own tail?

Reynard the Fox, is a new piece of engaging outdoor theatre for family audiences of all ages, using The Fabularium’s unique aesthetic, strong imagery and all performed upon their traditional wooden cart. It will feature storytelling, puppetry, original live music and The Fabularium’s bespoke animal headpieces.